I love this song at the moment.

Bush Hall is one odd venue.
The walk from the tube is laden with late night kebab shops, rowdy pubs and 24 hour newsagents.
I arrived early to find the doors shut. If I’m honest the hall didn’t look like it had been open for 6 months – the buildings flanking it had boarded windows and the doors looked like they’d take some weight to budge.
I left to meet a friend and returned a little later.
Upon my return, the doors were (finally) open. I stepped inside expecting to find a run down pub/gig venue.
*jaw drop*
The hall is beautiful. Chandeliers hang from the roof, the ceiling’s ornate, a grand piano sits in the corner: the atmosphere is fantastic.
(Photo copyright: Lotte Mullan) 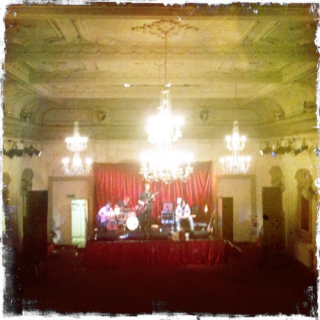 First up – Sam Brookes.
Sam Brookes has recently released his first album.
He plays guitar like Ray Lamontagne and Fionn Regan have personally tutored him. He leaves space where it’s needed but knows when it needs pushing too. Despite playing without a band, he managed to create a big sound that bubbled beautifully underneath his vocals.
Sam uses his impressive vocal range to his advantage – he skips from powerful gut singing to head voice quickly and easily – it’s a huge skill to use different voice without detracting from the song and Sam has it in spades. Well worth looking up.

Next – Lotte Mullan.
A quick google search on Lotte drags up quite alot – work experience at Sony, a £2m film deal, myspace, herspace, bandmix, bandcamp – she’s quite clearly very adept at self promotion.
So gearing up to watch her, I had high hopes. Which is probably why I found myself a bit disappointed – her voice was spot on, band work great, she held the room well but I just found the whole set a little deflating. It’s a real shame because she’s clearly got a bucketload of talent but something just didn’t connect with me on the night. Shame.

Scott Matthews on the other hand, managed to over deliver.
The first win was a presence of a band. I’d assumed, from watching live videos on youtube, that he’d either be touring solo or with a cello player in tow (who is bloody brilliant by the way.)
In fact – he also brought a tight as tight rhythm section who lifted the entire perfomance immensely.
His music is meant for highs and lows, rise and fall – and with a band backing him, it allows him to do so perfectly. They were brilliant.
The entire band were at ease on stage – he’s vocals are a real force – they flow like strings throughout his tracks without his face even moving. Truly unbelievable.