Alabama Shakes are a rocket heading for stardom.

Brittany Howard, the band’s lead singer has that old school rock voice that the UK has been waiting for. At its most energetic, it’s a blend of Caleb Followill and Aretha Franklin. At it’s moodiest, it’s a clash of Amy Winehouse and Janis Joplin. And it all sounds like she’s singing through a 50’s tube mike – beautifully crackly, beautifully rocky.

The band, consisting of a tight rhythm section, a modestly playing but oh-so-complimentary keyboardist and supremely talented guitarist stand near-rigid, rarely moving their spot. It provides the perfect counterpoint to Howard’s Jagger-esque stage manner. She really goes for it, whipping her head back and forth like Angus Young and walking around like she has all the experience and confidence of the Rolling Stones singer himself. She drags everyone along with her – you can’t help but think she’s great.

‘Hold on’, the track currently getting most airplay off of their album ‘Boys and Girls’, came early on the set. At first I thought it was an immature ploy to just get it out of the way – as if they were sick of it. In fact it was just there to set precedent for what was to come. The entire set was fantastic – blending Otis Redding with Kings of Leon. They not only live up to their hype, but they surpass it. Knowing the UK’s penchant for Americana blues-rock, they’ll be doing an arena tour within the next year or two. I bet ya.

Last time I saw the Staves, they were playing at Union Chapel (TimeOut’s venue of the year) and left everyone in the audience open-jawed – bringing the house down with only two tracks.

It was therefore with a mixture of excitement and worry that I entered the (beautiful) Tabernacle. Excited because I wanted them to be as good as the first time I’d seen them. And worried incase they weren’t.

This time they had a (very tight) rhythm section with them and when they all took to the stage and hit the first note of the set – I realised it was going to be different to the first time I’d seen them. Luckily for me, they were better.

Headlining the gig had obviously done wonders for their confidence and coupled with playing on home soil, they really went for it.

Soaring three part harmonies, reminiscent of Dixie Chicks, set to well constructed folk pop made a soothing elixir – and a very marketable one at that. It’s little wonder they’ve just signed to Warner and have Ethan AND Glyn Johns lined up to produce their album.

The set was short and sweet – each song punctuated by witty banter. The full band line up does an awful lot for their sound – it’s clear they’re rehearsed, having just got back from a VW campervan tour across the states with record label Communion. I can’t help but think the next time I see them, it will be in a room three times the size. And maybe, just maybe – the band will be bigger too. I can’t help but wonder what the addition of a string quartet would do for their sound. Even just a cello would bring it into Scott Matthew’s league.

I’d been to the Palladium as a kid – it’s a beautiful theatre and a gorgeous venue to listen to some music.

We were sat in the upper circle – nosebleed height – and whilst I was totally happy, I could see Wist wasn’t best pleased.
Adams came out to polite applause, quipping he was going to spend the following hour or so depressing us with his music. In Wist’s case, that he did.
The pace was slow and he mixed tracks from Ashes & Fire with previous hits – striking a balance between crowd pleasers & crowd intriguers.
As ever the musicianship was superb and his voice filled the theatre beautifully. However – something about the stuffy sat-down atmosphere didn’t quite gel with the tracks and despite the beautiful piano version of New York New York, he never quite hit his stride like he did in Oxford.
By no means was it a bad gig – the songs were great and he played them wonderfully – but it just didn’t click. No cigar Ryan – sorry!

The Lexington is a great pub in Pentonville – light and airy downstairs with a cool music venue upstairs.
The upstairs venue is completely different in feel – you wonder if you’ve wandered in to a late night jazz club rather than a pub’s first floor.

First up was Foreign Slippers – a female vocalist/keys player with a guitarist in support. The guitarist – we found out later – was also an accomplished drummer, playing sensationally in Duke’s band.
Foreign Slippers played a nice set of acousticy folk pop – punctuated by the guitarist tuning his 1950’s semi acoustic between each song.
‘We tune because we care’ the singer said in her thick Dublin accent. ‘It’s bloody annoying though isn’t it’ someone in the crowd shouted back.
They played a short set and departed – allowing Duke Special to take centre stage.

Duke Special was testing out tracks from his new album ‘Oh Pioneer!’ and kindly explained the meaning behind each track in his own nervous, disarming, hands-in-pockets manner. It’s not an act – he really is quietly charming and within minutes has the crowd in the palm of his hand.

At one point, he missed his cue for the chorus and apologised profusely to the audience as he asked the band to start again.

The set was warm and rich, the songs well written and the performance solid. His band (drummer & keyboardist) provided the perfect rhythm section to his voice and keys playing – making a surprisingly full sound considering the number of musicians on stage.

The few solo tracks Duke played showed everyone why this was the case – he is an unbelievable pianist with a talent for creating a full band sound from two hands, stride arrangement and one keyboard.

Finishing the set with a crowd please ‘Our Love Goes Deeper Than This’ – Duke left the stage with everyone clapping and smiling. The gig was truly (Duke) special.

Walking into Assembly Hall – I’m struck by the beauty of the place – it’s gorgeous. I have a theory that Scott is actually a bit of a diva – he refuses to play anywhere that doesn’t have one or more chandeliers.

Beth Rowley is on stage when I arrive. I find Wist and we settle down for the night’s festivities.

I’ve seen Beth play before – at a festival I was working at a couple of years ago. Back then, she was playing with a full band. Tonight there was only a guitarist on stage to back her.
Her voice is really strong – so many great female singers spring to mind when you hear her that you begin to imagine a delicious choir. Unfortunately – her greatest strength is also her greatest weakness – she could be one of any number of singers. She doesn’t sound different, or groundbreaking or original. Her harmonica playing was great – proving herself to be a very talented musician as well as singer.
I recognised a couple of tracks – but as expected – it was a mostly new set. Certainly enjoyable but I can’t imagine myself actively seeking her out to watch another Beth Rowley set.

Scott came out to huge applause – it turns out there are other people more obsessive than Wist. Who’d have thought it. Scott was in high spirits – cracking a smile on more than one occasion… considerably more than we witnessed at Bush Hall earlier on in Project 22.

It felt like ‘his’ gig – he owned the set and subsequently owned the room. The band were unbelievable and Scott was gracious – allowing each of them their own space to embellish and riff. Hugely talented musicians – they not only understood when it’s best to just give the track some space or when to fill – but they also somehow knew what the other members were also going to do…

There was no cello this gig – but it didn’t matter. Scott’s voice was thick and warm and filled the space once filled by cello perfectly. U
Unfortunately I popped outside during my favourite track – city headache – and only caught the final chorus and verse. He played for an hour and a half – a huge set – but it all felt over too quickly. Outstanding. 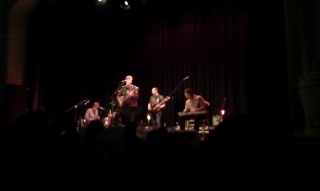 The Dublin Castle in Camden was one of Amy Winehouse’s regular haunts and signed photos of her adorn the bar you walk through to get to the venue out back.
As we walked in, I realised POB was already on stage.
There weren’t many people in the venue – no more than ten – but as POB told the crowd, he was trying out new material so the setting didn’t matter too much.
POB’s music can be described as electropop – a blend of boybands and electronica. He sang to backing tracks which didn’t particularly help hm but I enjoyed the set all the same.
It’s not my kind of music but I respect the fact he has the balls to sing what he wants.

Echoing the Sound took to the stage with an impressive display of rock funk. The musicians were perhaps too flashy – and I struggled with it. They were a little too flashy – and I didn’t feel they got the basics right. There’s no point in doing a slap bass fast rhythm section arrangement if you haven’t got your timing locked down in the first place. I wasn’t a huge fan of the singers voice – but I’m sure there are many people that would be. They played a fairly quick set and the Dark Rooms stepped up shortly afterwards.

The Dark Rooms played energetic punk indie-rock – the singer sang with gusto and entirely acted the lead singer part. He really got into it and most of the audience followed him down the rabbit-hole.
One crazed (drunk?) fan in particular seemed to be worshipping the band with some sort of rain dance. If she’d had a ribbon on a stick – she’d have been throwing shapes across the dancefloor that would challenge most mid 90s Christian dance troupes. The band played a set of Artic Monkeys style tracks. It was enjoyable – if a bit samey – but they definitely deserved the headline slot.