I’ve had two posts in my head recently that centre (loosely) around the Grand Cafe in Oxford. I’ve decided to combine the two below – it saves me from explaining the Grand Cafe twice…
According to Samuel Pepy’s diary, England’s first coffee house opened on the site of the Grand Cafe in 1650. I’ve walked past the Grand Cafe many times (and visited on several of those occasions, mostly to take advantage of its happy hour…) but the significance of it’s history hadn’t struck me until recently.

1.
Steven Johnson recently gave a great TED talk called ‘Where great ideas from.’ He begins by talking about the introduction of coffee and it’s effect on the enlightenment – (WIKI: an elite cultural movement of intellectuals in Europe that sought to mobilize the power of reason in order to reform society and advance knowledge).

Before coffee was introduced and accepted by Britain, the British would drink alcohol at most meal times. Not because we were all raging alcoholics but because it was the healthier choice. Drinking water was risky – A bottle of grog with your cornflakes was the safer choice in the morning as you could trust it not to make you ill. (Oh how times have changed.)

What did this mean for Britain? We were effectively drunk all day. Booze Britain indeed.
The introduction of coffee to Britain was of huge significance as it effectively switched our drinking habits from a depressant to a stimulant.

Once we’d shaken off the lifelong hangover of before – we were a sharper, more alert and ultimately more innovative nation than we’d ever been before.

Monumental developments occurred in science, philosophy, mathematics, the arts, literature, politics, education and language.
And in a cod science kinda way, you could claim it all started at Number 84 on the High Street in Oxford. The site of the Grand Cafe.
2.
The second reason the coffee house made such an impression on the British age of enlightenment is that it opened up conversation to all. There were very specific rules that those who visited coffee houses had to follow – rules such as 1) no man of any station need give his place to a finer man and 2) If a fight broke out, the instigator would have to purchase the offended a cup of coffee.

This essentially meant coffee house clientele were a particularly diverse bunch – and the room layout promoted conversation and the sharing of ideas.

The Grand Cafe (then called the Angel) alongside other coffee houses in Oxford were referred to as penny universities – they allowed Oxford’s wits and virtuosos to mix with others from all walks of life. They acted as a ‘centre for social intercourse, gossip, and scholastic interest’ – a place where ideas and theories were born,  meddled with, torn down and born again.
In the wake of the NOTW scandal, The Economist published a piece on the future of news. The opening paragraph is below:
‘Three hundred years ago, news travelled by word of mouth or letter, and circulated in taverns and coffee houses in the form of pamphlets or newsletters … Everything changed in 1833 when the first mass-audience newspaper, the New York Sun, pioneered the use of advertising to reduce the cost of news, thus giving advertisers access to a wider audience … The penny press, followed by radio and television, turned news from a two-way conversation into a one-way broadcast, with a relatively small number of firms controlling the media.
Now … the news industry is returning to something closer to the coffee house.The internet is making news more participatory, social, diverse and partisan, reviving the discursive ethos of the era before mass media.’
There’s been a million articles written on the connectedness of the web and how brands etc have to have two-way conversations with people to survive on the web so I’m not going to jump on that band wagon.

But I do think if we make sure we provide the right platforms for sharing, we may well be teetering on the edge of the digital age of enlightenment.

My obsession with venn diagrams continues…

I’ve been a fan of Ryan Adams for years – ever since a guitarist I used to play with forced me to listen to him on repeat.
I’d love to say I warmed to him immediately, but if I’m honest I just didn’t get the fuss the first few times I heard him.
However – luckily for me it suddenly all clicked and I fell in love with his music.
As they say – once bitten, forever smitten, so I’m almost ashamed it’s taken me this long to see him live.

The support, Jesse Malin opened to a sweat drenched audience.
Not only was it the hottest day yet of 2011 but the air con had packed in at the theatre. To make matters worse, the venue was plastered with sings saying ‘At the request of the artist, no drinks will be allowed into the venue.’
Even with the bottle of water I smuggled into the auditorium, I was uncomfortably  hot.
Jesse was more of a storyteller than a musician. His voice cracked like a 70’s punk and his Dead Kennedy’s style guitar work sounded feeble without the support of a full backline.
But the stories he shared between songs were hilarious. He really should’ve been a stand-up. I found myself spending most of his set wishing for the songs to finish so we could hear him speak again.
With a – far too polite to be punk – goodbye, Jesse finished his set and vacated the stage.

And so we waited, in the blistering heat, for Ryan to take to the mic.

After a little while, he walked out to a wall of applause. He looked nervous and uncomfortable.
His stage chat matched this demeanour. Every sentence felt like a struggle – like he might not get his words out or he might say something wrong or offensive.
I sat there, praying for him to start a song.
After spending what seemed like an age tuning his guitar, Ryan opened with Oh my Sweet Carolina.

I forgot about the heat.

I forgot about the 16 hour days I’d pulled at work that week.

I forgot about everything.

The man has a talent like no other. He really can move people with his voice.
He’s an incredible musician and a hugely talented songwriter.
And this gig proved that to everyone.

I understand why people use camera phones at his gigs – you want to savour the moment forever.

He played a lengthy set (20 songs including the encore.)
Much longer than I expected – I almost missed my bus back to London.

Every track was as heartbreaking and beautiful as the last. The space between tracks was often broken with uneasy, rambling chat which I found myself warming too. There is something special about seeing someone that is so clearly in it for the music – not because they want or need to be the front man.

If ever you get the chance to see this guy live – you really should.
He’s not nearly as well known as he should be and is without doubt one of the most talented performers I’ve ever seen.

I lost my Goldfish virginity on the 25th June 2011.
The band is simply incredible.
Playing INDOORS at a 1.5 acre roof garden venue on a particularly hot summers day sounds like a recipe for disaster. Who is going to head indoors when they can sip overpriced pimms on slinky sofas outside?
Nearly everyone it seems.

It wasn’t just the venue that was against them for this gig – the band had flown over from Ibiza to play.
On the way through customs, the airport security had confiscated their instruments. So they’d had to beg, borrow and steal to even play this gig.

They’ve quite clearly got a following from their home, South Africa. It didn’t take me TOO long to realise I was surrounded by ‘Safa’s. All of them were there to see their nation’s finest export (except perhaps Tolkien and white wine.)

From the moment the band started playing, the room filled. The atmosphere turned electric. Boy does this band know how to play a crowd. Everyone was dancing.
They’re sort of an electronic/dance/jazz band – kind of a mixture of Fatboy Slim’s big beats and Mr Scruff scratch jazz – but with live instruments and loop pedals.

By the time they’d finished their set and the venue was kicking us out – I was a convert.
I turned to my South African friend who looked particularly glum.
‘Well that was rubbish’ he said.
‘They’re usually much better than that live.’

Roll on next time Goldfish – you’ve got my hook, line and sinker.

After deciding to review 22 gigs between June 14th 2011 and June 13th 2012, I’ve somewhat blown my load a little by seeing 3 in quick succession. Before July had even began!
Here’s the first:

I’m always a bit wary of outdoor ‘mainstage festival’ style gigs. It’s not just the fact it feels a bit impersonal – it’s actually the fact I don’t think many bands have the sound to fill such a vast area.

However – KoL are famous for their stadium sound so heading to Hyde Park on a sunny Thursday afternoon really seemed like a no-brainer.
Stopping for a couple of drinks enroute to the venue felt like a brilliant idea at the time, but it unfortunately meant we missed all but the last few songs of the support.. The Modfather himself – Paul Weller!
Loosened up and with an okay view of the stage, we watched the Kings open their set with Four Kicks.
The bass thumped, the guitar twanged and Caleb’s whisky dry voice screeched.
My heart dropped. It sounded like the CD.
It could have been the CD.
They were rehearsed to the point of being robotic. 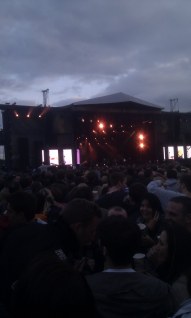 Gone are the garage days for Kings of Leon.
I don’t quite know why I was expecting them to come out and play with the same crunch and edginess that you hear on the Holy Roller Novacaine EP but I certainly didn’t hear it.
It’s obviously time for me to say farewell to the Followill looseness – everyone else seems to have – but I have to say I miss the way they played on their earlier albums.
The band played a hits filled set – but it just didn’t feel right to me. It was like listening to a polished studio album. And in a bad way.
The whole point of seeing a band live is to feel the push and the pull and the frayed edges, the moment when you think they’re going to break filled by the sound of them saving it again. It’s what keeps people going to live gigs – its the excitement, the energy, the electricity.

KoL missed this at the Hyde park gig for me. They were clearly accomplished. But to the point it felt their early selves had been replaced by machines.
And it unfortunately only cemented my belief that by the time a band garners a stadium filler following, you may as well just stay at home, put your feet up on the sofa and click play on the CD player.
The beer is cheaper – plus you can skip Sex on Fire.