Popped along to the APG Big Thinking event yesterday. 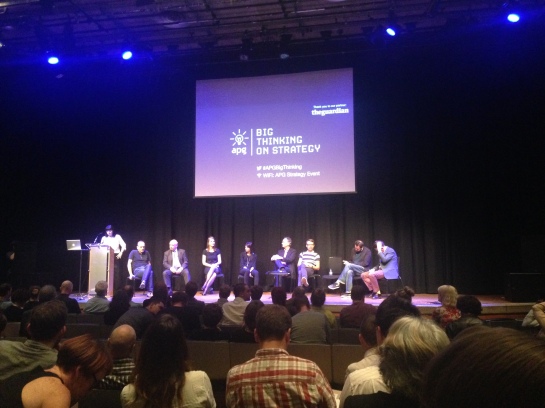 The schedule was full of heavyweight strategists and thinkers.

First up – Guy Murphy, talking about Global strategy. He looked back at Theodore Levitt’s theory of globalisation – a theory that assumed consumer taste would homogenise, as companies used economies-of-scale to offer cheaper uniform products around the world. A logical theory, but one that hasn’t quite come to fruition. Instead, our love for variation over uniformity has won out. Technology and economies of scale didn’t create a global consumer, but it did create a global culture. The best bit though, is that that global culture didn’t push out local culture. Instead it’s sort of overlaid onto local variation. Leaving us with a different approach to marketing – ‘glocal’. An embarrassing word – that perhaps falls between two stools. But at least it uses local culture as a creative multiplier, rather than ignoring differences around the world.

Bridget Angear was up next. She explained her recent attempt to prove a link between strategy and effectiveness. Working under the assumption that great thinking (awarded by the APGs) leads to great work (lets ignore creative awards for now) which leads to great results (awarded with IPA effectiveness), she totted up the number of campaigns that had won at both APG and IPA in the last decade. From 35 Gold APG awards and 40 Gold IPA awards, only 5 campaigns claimed both. (The five were ‘Think – Road safety’, ‘Honda – Power of dreams’, ‘Sainsburys – Try something new today’, ‘Dove – Real beauty’ and the Home Office work.) Ignoring the cringe boast that AMV can claim to have created two of those five, Bridget made a strong argument to bake effectiveness in from the start of campaigns. She also mentioned that the IPA effectiveness judges dismissed over half of this years papers because they didn’t state their objectives properly!

Ben Malbon spoke about his experience agency side and Google side. Despite slide malfunctions, he was one of my favourite speakers of the day. When he started at Google, strategists were noticeably absent. It took him about 6 months to work out that strategy does exist at Google, but its not embodied by people called strategists. Just as creatives are the rockstars of the ad world (and planners are the unsung, unloved, underpaid roadies), tech companies glorify engineers and UX designers over product managers. But product managers are the mini-CEOs that decide whats made, how its made, for whom, how its launched, what happens at launch etc. Product manager – a boring title, for a fascinating job. They operate at the intersection of business, technology and UX, and have to be able to converse in all three, with fluency in at least one.

Ben talked a lot about Mintzbergs two classifications of strategy: deliberate and emergent. Deliberate is grand strategy, it’s stepping back and seeing the big picture. Emergent is much more agile, adaptive, iterative, and messier. Deliberate is hard. Emergent is even harder. The old view of planning is that it exists to give creatives an unfair advantage. Which is fine, but uses only ‘deliberate planning’. Ben argued that todays strategists should work throughout the project, rather than handing the baton over to creatives half way through. Quoting Noah Breier, we heard we should spend some of our time thinking about building systems and models. We can add value at this later stage of the project by adding constraint, by focusing and funnelling effort. By defining a system for the brand (be it ‘Small but tough’, ‘The Axe effect’, ‘Keep walking’, The man your man could smell like’ etc), we then don’t need to keep making new ones. Once defined, you can invest your time in an emergent strategic approach, finding things that can run on the system.

It’s a fundamental point – planners sometimes get themselves in trouble in this area. New ‘operating systems’ get rewarded much more than ‘software’ in agency environments. So planners try to reinvent the wheel, creating new grand strategies. Instead we should be thinking about what runs on the system, the emergent stuff.

Adam Morgan was his usual brilliant self. He talked us through a slim section of his new book ‘A beautiful constraint.’ He started by explaining that in the past, categories have structured around tradeoffs, poles of values… So you can be fast, or you can be fuel efficient. Healthy or quick. Good quality, or good price. Brand strategy involved choosing one of those poles, and then linking yourself to that pole through creativity. But new emergent businesses are challenging this traditional view and finding new positions straddling both poles. From Whatsapp (cross platform mobile comms for free), to Zara (latest fashion and low prices), from Chipotle (good value, fast food AND sustainable) to Aldi and Lidl (quality + price…) And that’s interesting because its creating a new set of consumers – unreasonable people. Or ‘Ubers children’ as Adam put it. The million dollar question for agencies is , how can we move our established steadystate clients into this pole-less era. Before someone comes in and gets there first.

Sir Lawrence Freedman, author of ‘Strategy – A history’ and todays keynote speaker, was fantastic. His talk, called ‘From the war room to the board room’ revealed some fantastic quotes. He defines strategy as the art of creating power. He described strategy as a soap opera, not a three act opera. The curtain never comes down – its the evolution of a central idea through changing circumstances. On Sun Tzu, he shared a hilarious slide showing the sales explosion after Tony Soprano mentioned ‘The Art of War’. Sir Lawrence likes Sun Tzu’s text, but questioned its usefulness -it works until you meet someone who’s also read Sun Tzu. Then you’re stuck! He talked a little about famous autocrats and their consistent downfalls. He explained it thusly: when autocrats start out and rise up organisations, they have people around them who challenge them and hone their ideas. But once at the top, sycophants often creep in and surround them. They don’t receive the same challenges they once did, and their word is accepted as gospel – despite its lack of road tests and optimisation from challenging colleagues.

Russell Davies spoke after Sir Lawrence. He split his presentation into three bits: 1. Unsupported theories. 2. Boasting. 3. Things that seemed to work. Lovely. In his usual humble fashion, he talked about how he’s not a grand strategist, or even a good planner. His portfolio says otherwise – he’s not just a great strategist, he’s brilliant at getting organisations to do stuff too. Russell’s first section focused on the shift from a world of persuasion to a world of usability. In previous years, getting a brilliant product was much harder than creating a parity product with advertising. As companies have grown up, they’ve developed huge marketing machines to create persuasive materials. Quoting Richard Huntington, he stated the ad industry essentially exists to differentiate parity products.
But thanks to the proliferation of channels, shorter timelines, smaller budgets, and consumer transparency, marketing has got way harder. But making brilliant products, just got way easier (if you’re a digital organisation that is – one with usability at its core, not persuasion). The single biggest problem we face as agencies is that all clients want to carry on with ‘parity product + marketing’. It’s what we’ve always done, so it seems easier. We’ve got a machine that’s set up to create marketing for parity products, so that’s what we want to keep doing. But you know, ‘more digitally’. So we ask questions like ‘whats our twitter strategy?’ instead of ‘how can technology improve a consumers experience?’ That machine will wind down at some point. So Russell recommended we spend time developing skills making brilliant products over honing persuasion skills.
The Boasting section wasn’t boasting at all – just him showing the accolades Gov.uk has received. All deserved.

Russell’s ‘things that seemed to work’ section was interesting, from a practical point of view. First up, everything should start with user needs. As strategists, we should be working to change the organising principle of organisations to be about that. And that means avoiding innovation until we fix all the basics. As @halvorson put it: “I mean, just basic web and mobile UX fixes would catapult so many companies ahead of their competitors.” His second point was ‘The product is the service is the marketing’. He explained a huge celebrity launch wasn’t needed to direct people to gov.uk, because the multidisciplinary team had pooled their expertise and worked out that they could just redirect every old Directgov page to the new gov.uk page. Thus, the website a quiet, smooth launch – much better than spending lots of money. His third point was that making things open makes them better. He talked about this week’s blunder from a Sainsburys store- where an internal poster asking staff to persuade customers to spend an extra 50p was displayed in the front window. Ultimately, he explained, there is no such thing as internal communication. This sort of stuff is always going to happen. So the best way to talk to your own organisation is to put it into the public. Which is why Gov.uk share all their updates, all their code, everything. And why we should create weeknotes. And all share a bit more.

Charity Charity’s talk was the one that resonated with me least. I couldn’t help but think that she’d misunderstood feminism a bit! She held up 1950s advertising and Cinderella stories as inclusive marketing for women. The work she shared from her own company didn’t quite feel like the Pankhurst dream of equality to me either.

Malcolm White from KROW closed the day, and with low energy levels, his dry wit was especially appreciated. Couple of nice quotes that I wrote down: ‘The laughing man just hasn’t heard the dreadful news.’ And ‘If you hit ANYTHING, call it a target.’ Defining strategy in a similar vein to Sir Lawrence (“A way of getting more out of a situation than the starting balance of power suggests.”), Malcolm delivered a great talk to close the day. But his ‘Strategy equation’ was a little squiffy, for sure.

Fun day. Sorry for the essay.