Uncategorized
Leave a comment
I’ve had two posts in my head recently that centre (loosely) around the Grand Cafe in Oxford. I’ve decided to combine the two below – it saves me from explaining the Grand Cafe twice…
According to Samuel Pepy’s diary, England’s first coffee house opened on the site of the Grand Cafe in 1650. I’ve walked past the Grand Cafe many times (and visited on several of those occasions, mostly to take advantage of its happy hour…) but the significance of it’s history hadn’t struck me until recently. 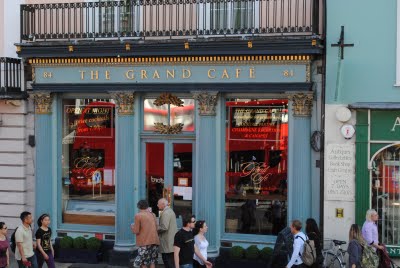 1.
Steven Johnson recently gave a great TED talk called ‘Where great ideas from.’ He begins by talking about the introduction of coffee and it’s effect on the enlightenment – (WIKI: an elite cultural movement of intellectuals in Europe that sought to mobilize the power of reason in order to reform society and advance knowledge).

Before coffee was introduced and accepted by Britain, the British would drink alcohol at most meal times. Not because we were all raging alcoholics but because it was the healthier choice. Drinking water was risky – A bottle of grog with your cornflakes was the safer choice in the morning as you could trust it not to make you ill. (Oh how times have changed.)

What did this mean for Britain? We were effectively drunk all day. Booze Britain indeed.
The introduction of coffee to Britain was of huge significance as it effectively switched our drinking habits from a depressant to a stimulant.

Once we’d shaken off the lifelong hangover of before – we were a sharper, more alert and ultimately more innovative nation than we’d ever been before.

Monumental developments occurred in science, philosophy, mathematics, the arts, literature, politics, education and language.
And in a cod science kinda way, you could claim it all started at Number 84 on the High Street in Oxford. The site of the Grand Cafe.
2.
The second reason the coffee house made such an impression on the British age of enlightenment is that it opened up conversation to all. There were very specific rules that those who visited coffee houses had to follow – rules such as 1) no man of any station need give his place to a finer man and 2) If a fight broke out, the instigator would have to purchase the offended a cup of coffee.

This essentially meant coffee house clientele were a particularly diverse bunch – and the room layout promoted conversation and the sharing of ideas.

The Grand Cafe (then called the Angel) alongside other coffee houses in Oxford were referred to as penny universities – they allowed Oxford’s wits and virtuosos to mix with others from all walks of life. They acted as a ‘centre for social intercourse, gossip, and scholastic interest’ – a place where ideas and theories were born,  meddled with, torn down and born again.
In the wake of the NOTW scandal, The Economist published a piece on the future of news. The opening paragraph is below:
‘Three hundred years ago, news travelled by word of mouth or letter, and circulated in taverns and coffee houses in the form of pamphlets or newsletters … Everything changed in 1833 when the first mass-audience newspaper, the New York Sun, pioneered the use of advertising to reduce the cost of news, thus giving advertisers access to a wider audience … The penny press, followed by radio and television, turned news from a two-way conversation into a one-way broadcast, with a relatively small number of firms controlling the media.
Now … the news industry is returning to something closer to the coffee house.The internet is making news more participatory, social, diverse and partisan, reviving the discursive ethos of the era before mass media.’
There’s been a million articles written on the connectedness of the web and how brands etc have to have two-way conversations with people to survive on the web so I’m not going to jump on that band wagon.

But I do think if we make sure we provide the right platforms for sharing, we may well be teetering on the edge of the digital age of enlightenment.