There’s an exhibition on at Somerset House at the moment about the restaurant elBulli.
If you get a chance to go, it’s well worth visiting.
It’s also probably the closest you’ll ever get to Ferran Adria’s food – as it’s now closed down.

The restaurant was originally founded by Dr Hans Schilling and his wife Marketta in 1965.
Marketta kept French bull dogs, which she affectionately called ‘Bullis’

The bullis symbol ended up on everything:

Shortly afterwards, in a chat with the great French chef Jacques Maximin, he found the fundamental principle he would cook by: 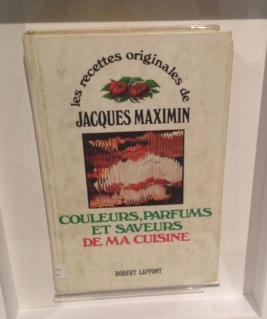 Once the decision never to make any more versions of cookbook recipes had been made, Ferran Adria worked to develop a new style of his own.

Parallel to the daily service, Ferran and his closest team members made the most of afternoons when there was no service and used them to think up and perform tests which were then meticulously recorded in creativity books.

The creation of certain dishes called for the exact reproduction of ingredients and arrangement. This was made possible by producing guides using modeling clay, like this. 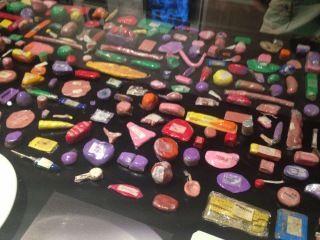 Here’s a video of him talking about it.

And here’s a diagram. That is simultaneously illuminating and confusing.

Ferran soon developed a team exclusively for the theory and practice of creativity – in the form of his cooking workshop.

Pretty interestingly, they introduced a creativity audit which, using a standard procedure, assessed the degree of excellence of new menu contributions.

Who said that order and creativity didn’t mix…?

Here’s a diagram of their creative process. 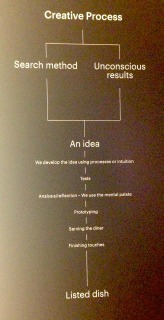 Again interestingly – it’s more about the process/technique than the dish.

Ingredients come in at the prototype stage.

Here’s a couple of ones that are interesting outside of food.

9. A dish is enjoyed through the senses; it is also experienced and rationalized by reflection.

23. Knowledge and/or collaboration with experts from different fields (gastronomic culture, history, industrial design, etc.) is essential for progress in cooking. In particular, collaboration with the food industry and the scientific world has brought about fundamental advances in cooking. Sharing this knowledge among the sector’s professionals has contributed to this evolution.

Every possible thing was considered – even the serving dishes. The container as well as the content.

In the late 90s, chefs realized that avant-garde cuisine would evolve much quicker if they shared what each person had discovered.

elBulli was closed at it’s peak by Ferran, at the end of July 2011.

This is a Bulli made for the restaurant’s closing day.

It’s little wonder why elBulli was the best restaurant in the world.
It’s just annoying I’ll never get to taste its food.