I’d been looking forward to this conference for weeks – and it certainly didn’t disappoint.

Even the venue was exciting – Conway Hall. I’d wanted to go there for ages – but I’m always far too lazy on a Sunday morning to haul myself out of bed in time for their weekly lecture. 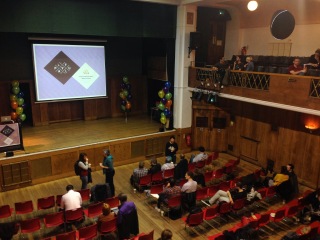 Duncan Fitzsimmons was up first. 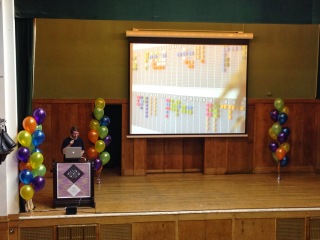 He’s a partner at a design studio called Vitamins.
I hadn’t heard of the studio, but I’d seen some of their work – it’s fantastic.

This manual idea for a mobile phone is nothing short of genius.And I like what they’re doing with the lego calendar too – it could seem like a bit of a waste of money considering the payoff – but it’s interesting because it starts to explore how using 3D tactile hardware transforms our experience with digital things.

Anne Holiday was up next. 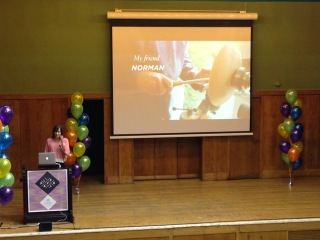 There was a lovely quote in her presentation – ‘Build what it is you want to build and learn as you go’.

She’s recently made a documentary about the Society for Model and Experimental Engineers. It was beautifully shot and I’m looking forward to watching it.

She talked about how making gets you into the flow zone – where you’re immersed completely in a project. When you let yourself go like that, great things can happen.

George Buckenham is a game designer. 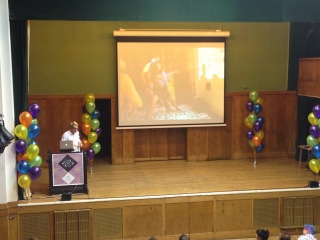 He talked about inputs for gaming, which was fascinating. There’s a whole subculture on the web that obsessively discuss this stuff – discussions about the right pressure / dimples / size / shape / feedback of a button to stir nostalgia for a particular arcade game, or the correct joystick movement for a new game design.

It’s interesting to understand that for most games, inputs don’t enter the design process – you’re going onto a pre-existing platform and you therefore only have a certain amount of inputs to play with. But if you stop worrying about costs and take commercial problems out of the equation – you can design the inputs to work best for the game, rather than the other way around.

He was fantastic – totally wins my vote for best speaker of the day.
He spoke about ‘putting things in things’ and how a box is often better than the thing inside it. The mystery and anticipation gets your heart pumping more than the stuff contained within.

And we often think of media as boxes too. Media is just a collection of boxes to be filled.
The silly thing about that, is that we often think of the boxes as the limit – the constraint.
Much like a vacuum is defined by it’s vessel.
Instead we should confront the boxes and figuring out how we can bend them to what’s best.

He also talked about the Artefact cards project (which I’ve seen before, and is really interesting) and a new project he’s just completed with the Said Business School at the University of Oxford. The project involved getting senior business people to start doing things with their hands again – making products rather than just thinking about them. The project culminated in them pouring molten brass into a mould that they’d each made – to create a beautiful key as a memento for the course.

Fran Edgerley spoke about some of the architectural projects that she’s been involved in.

Turning an empty petrol station into a cinema was a personal highlight.

Pippin Barr is another games designer. He talked about some of the projects he’s created recently – which was fascinating.

One of the topics he talked about was the fragility of games – how one change in the rulebook can have massive effects on the gameplay. For example, if you allow the paddles to move left and right (as well as up and down) in pong, it has a dramatic effect on the experience.

Another topic he touched on was the perfection of iPhone as a device, and how it’s a personal mission to create things that jar slightly with that. The creation of a game called Snek (based on Nokia’s Snake), where ‘awkward’ input patterns are used to direct the movement was a great example of that.

Dani Lurie spoke about the merits of mischief.

I thought it was a pretty great talk – and some of the experiments that she’s been ‘conducting’ to learn new things were really quite funny.

Marie Foulston spoke about her relationship with the game Animal Crossing. 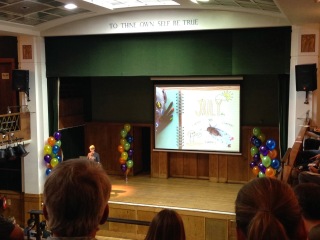 She presented it in a diary format – which was really novel, and the slides that she’d designed were beautiful (the best we saw all day.)

Ben Reade is an Head of Culinary Research at the Nordic Food lab. 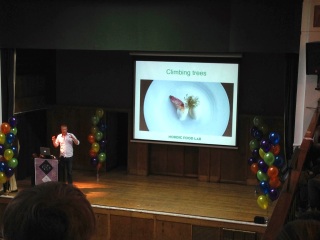 He started with a great quote – “Only play with your food when you’ve eaten all your toys.” He mentioned that there are two words in Danish for play: Spille and Lege.

Spille is play time with rules (a boardgame or chess). Lege is open play – exploration.
Ben thinks the English language lacks something without this differentiation. I think he could be right.

At the moment he’s spending his time working with fermentation and mould.
There isn’t much of a precedent in terms of robust science behind culinary tricks using fermentation.
It’s an interesting proposition, and I’ll certainly be following to see where it goes.

Dan Catt was a fantastic speaker.

He came up with an idea several years ago, that the large kindle could be used as a changeable board for a board game.

He loves Snakes and Ladders, and was inspired by something Russell Davies said on Shift Run Stop about the grading of jigsaws vs. the lack of grading for Snakes and ladders – so he decided to start experimenting with different Snakes and Ladders boards.

He also talked briefly about ‘slow computing’ – which is a brilliant idea.
When you’re not using your computer, the computer should be doing stuff for you in the background. Maybe it’s pulling together all of your social media posts, and rendering a beautiful photograph with them – but it should be doing something. Why do you have to be sat at your desk, for it to be working? It’s a nice idea and I’m sure they’d be loads of ideas off the back of that brief. 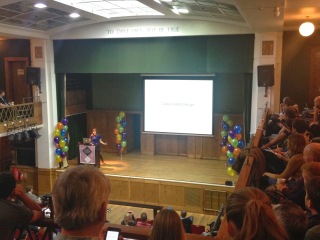 Both were great ideas, and it’s great to see someone passionate about communicating insight from data – we’re gonna need more Stefanies in years to come. 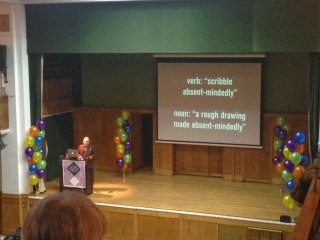 His work is beautiful – geometric shapes, with real depth.
He talked a little about Moire patterns, and how that’s influenced his work.
All quite interesting.

A top day – look forward to next year!