Just getting to this museum was an experience. Sign in at the college reception, turn right through a back door, take two flights of stairs downstairs then past the library. It’s just been through a complete refit, but whilst they’ve managed to let in more light and give it a lick of paint – it still reminded me a bit of my old school classrooms. 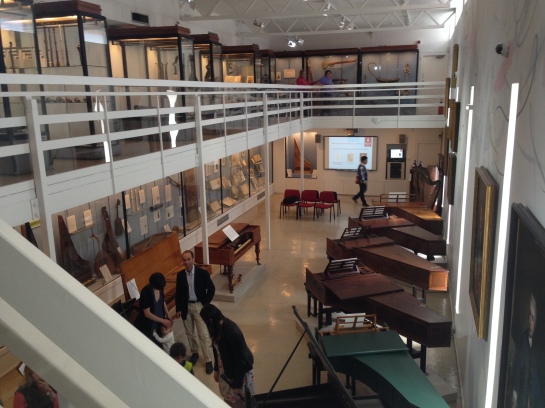 The college was created after the closure of the 1851 Great Exhibition. The Prince consort, Albert, prepared a memorandum outlinining that all profits from the exhibition be used to create an estate that would house institutions devoted to the ‘furtherance of the industrial pursuits of all nations.’

The area he proposed now houses three of the UK’s major museums, and the Academy of Music.

Holst was a student at the college in the late 19th century, and an autograph copy of Venus from his suite The Planets was prominently on display.

There were some interesting instruments on display, that I’d never seen before.

Like the Balalaika (a Russian folk instrument, characterised by its long neck and triangular shaped body), the Cittern (allegedly owned by Titian in 1580) and the Laba (a telescoping trumpet, of Chinese origin.) 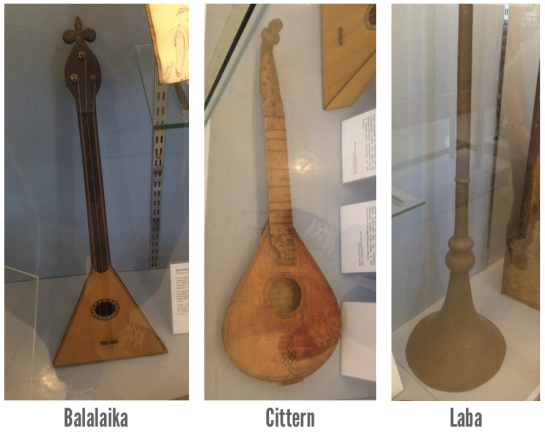 Or how about the Ud (plucked string instrument from Arabian origin), Nyastaranga (an Indian throat trumpet that amplified the human voice) or Porchettes (essentially miniature violins)?

The Clavicytherium in the image below is widely considered to be the earliest surviving stringed keyboard instrument in the world. It’s not signed or dated, but a fragment of a legal document used to line one of the internal joints has been dated between 1470-80. 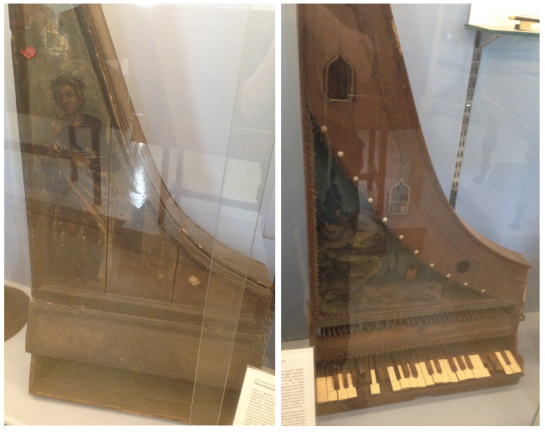 They also had on display what is considered to be the earliest surviving five-course guitar.

There was a slide trombone in one of the cases, with the inscription ‘This instrument, on which Sir Edward Elgar played as a boy, has been kindly presented by him to the YMCA music section.’ Considering the instrument was made in 1892, and Elgar was born in 1957 – he was far from a boy when he played this trombone… 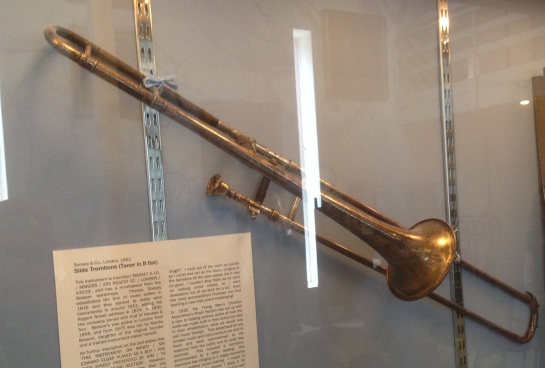 And there were harpsichords a plenty.

#1. Pochettes were used by dancing masters, who needed to accompany their students but didn’t want to share their fee with a separate musician.

#2. The Wetheringsett Organ Soundboard formed the soundboard of a 16th century English organ. It survived in the form of a dairy door and was discovered in 1977.

#3. Barak Norman was one of the last English viol-makers. He worked near St Paul’s cathedral at the ‘Bass Viol’, next door to the ‘Harp’. Say what you see.