#6.
Piece: Dance (I)
Artist: Henri Matisse
About: Matisse received a commission in 1909 for two large decorative panels, Dance & Music. This is the first study of Dance, to assess its composition. The figure on the left appears to move purposefully, pulling the others around that are a little weightless. Matisse studied the patterns and colours of carpets and North African scenery – and whilst those influences aren’t overtly visible here, they informed his approach.

#7.
Piece: Broadway Boogie Woogie
Artist: Piet Mondrian
About: Piet Mondrian’s wanted to find an approach to art that was disciplined and structured, built up of the simplest elements – straight lines and pure colours. This is one of his more complex pictures; created when he left Europe for New York at the start of World War II. He loved the city’s architecture, and adored American jazz. This painting was his homage to both of those things: the grey banding suggests the city grid system, and the sharp staccato colour implies free jazz and improvisation along a theme. 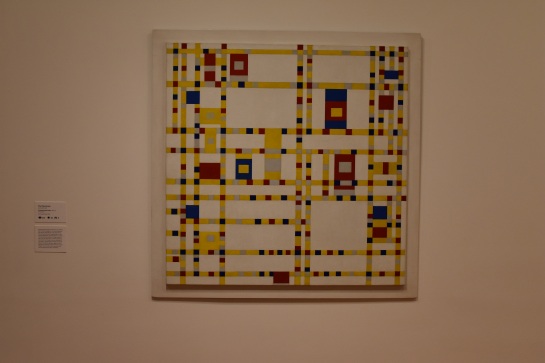 #8.
Piece: The Persistence of Memory
Artist: Salvador Dali
About: As Gombrich explains, people and objects often seem to merge and exchange places in our dreams. “Our cat may at the same time be our aunt and our garden Africa.” Dali attempted to make sense of this confusing dream life by painting similar dreamscapes. He mixed photorealistic fragments of the real world together – to imply apparent madness. In doing so he didn’t attempt to show what we see, but what we dream.

#9.
Piece: The Vision of St John
Artist: El Greco
About: El Greco (‘the greek’) fell in love with the work of Tintoretto when he moved from Crete to Venice. Tintoretto considered his painting complete when he had conveyed his vision for the scene, and it was that function over form approach that El Greco embraced. By ignoring traditional technique, he created this dramatic biblical scene full of blurred lines and sharp light. It shows a moment from the book Revelations, in which the fifth seal of heaven is broken and the saints (including Saint John on the left) are martyred. 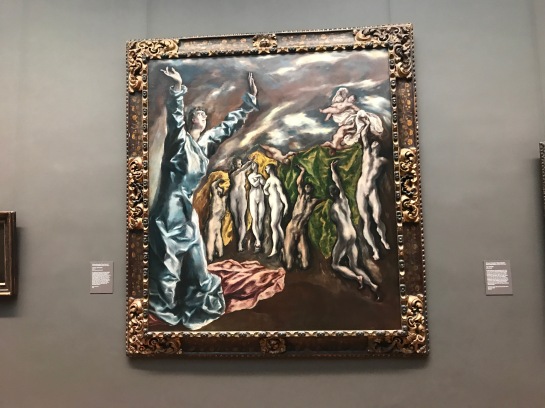 #10.
Piece: Bridge over a Pond of Water Lilies
Artist: Claude Monet
About: Monet urged his impressionist pals to abandon the indoors and create mobile studios outside, where they could place themselves in front of the ‘motif’. He fitted out a riverboat to act as a studio, and painted his river scenery. He wasn’t interested in the detail, but instead giving ‘an impression’ of the overall scene – the effect the light had on the water and the leaves, the depth of the shadows etc. Many critics at the time lambasted the impressionist movement (the term impressionist was originally a criticism, but the negative connotations were quickly forgotten). But Monet was an accomplished painted, and Gombrich tells us his tones and colours as deliberately as any landscape painter of the past.