I spent the majority of yesterday at a fantastic conference – The Story 2014.

The Story is organised by Matt Locke. The line up this year was just incredible – I’m amazed he managed to pull that many big names together in one room.
Tech proved a bit of an issue throughout the day but it didn’t ruin the content – it just slowed it down a little bit. My phone also played up during the day, so I don’t have a photo of every speaker – which is a shame.

First up was Ben Payne from Ministry of Stories.
Ministry of Stories is a fantastic charity, helping improve literacy in the east end of London.
I’ve actually already been along to the Monster Supplies store – it’s well worth popping along to pick up some canned ‘escalating panic’ or impacted earwax.

Next up was the performance artist Bryony Kimmings.
I’d never heard of Bryony before, but she was one of my favourite speakers on the day.
Her latest piece was inspired by an annual Stamford Uni survey, that asks young children what personality traits they would like to have when they grow up. For decades, the top personality trait has been ‘kind’. But it was recently pushed from the top spot when the children decided they’d rather be famous.
The project, called ‘Credible Likeable Superstar Rolemodel’, is a claw swipe at the manufactured pop industry. Under the watchful eye of her niece she’s created a new popstar called Catherine Bennett, an intelligent feminist with mockney pipes – the idea being that if it’s popstars that children look up to, we need to make sure our popstars are suitable rolemodels. No, Miley Cyrus doesn’t count.

Visual artists Ian Forsyth and Jane Pollard took to the stage after Bryony.
I thought they were brilliant. They’ve just finished filming a documentary about Nick Cave, called 20,000 days on earth.
They had a beautiful disarming way of presenting and you could tell they really love their work.
They’ve worked hard to make sure their documentary isn’t like any other rockumentary – drawing inspiration from the Stones film 1+1 Sympathy for the Devil and the Led Zeppelin documentary The Song Remains the Same. To do this, they worked to a number of principles.
Firstly, they decided they didn’t want to tell the biography of him, so they (1) reset expectations – showing the first 19,999 days of Nick’s life in the opening credits. (2) They decided they should embrace the myth – they didn’t want to create a documentary that showed the man under the mask (i.e Nick washing the car). Instead, they wanted to show Nick as he is – the man with the mask – a sort of hyper reality. (3) The best things come to those who wait. Endurance interviewing with a psycho analyst for 2 days gave them much better footage than they could have got from a string of half hour chats. And (4) they used mnemonic triggers to ensure Nick talked about the right things – showing him certain objects that would illicit memories from different periods in his life.
I can’t wait to see the documentary.
I hadn’t heard of Kyle Bean, but I’ve seen his work an awful lot.
I’ve even had his work set as my laptop background – without knowing it was him behind it!
He’s a great illustrator, that makes beautiful images out of physical things. he calls it ‘tactile illustration’.
He always tries to make his work topical – even his degree piece poked fun at technology news (he created a book-cum-laptop called ‘the future of books’. He talked a lot about his love for juxtaposition – combining two things in an unusual way to make a point. One of his most recent pieces involved creating an NSA branded whistle, with a USB stick for a mouthpiece – it was used for an article on the whistleblower Edward Snowden.

Kenyatta Cheese spoke next.
He was a bundle of energy, getting us all to stage fits of laughter for a photo shoot.
He talked about the history of the .gif file, through snow white gifs.
It was fantastic – a really impressive speaker. 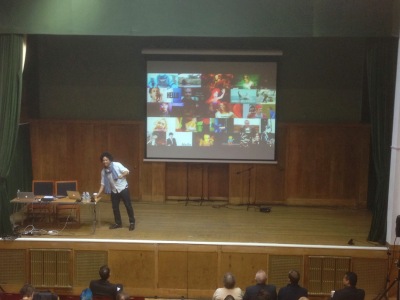 Next up was Stella Duffy.
Stella had been through cancer surgery only two weeks before the conference, but she was up on stage running around, dragging up audience members to participate and lots more.
She started by taking us through dionysiac story structure (it wasn’t planned but she decided to do it after listening to Kenyatta’s talk.) After that, she explained the concept of a ‘Fun Palace’ and how it was her mission to create a number of these across the UK in 2014. The Fun Palace was originally concepted by Joan Littlewood and Cedric Price, under the motto ‘Everyone an Artist, Everyone a Scientist.’ The palaces aim to take art and science to the masses, as art and science HQs tend to be a bit scary and off-putting.
It sounds like a fantastic project – and I hope lots of people get involved. You can read more here: http://funpalaces.co.uk/

Barnaby Smith took to the stage after lunch.
Barnaby is a Foley artist – a rather random job that involves creating bespoke sounds in a studio that sit as incidental sounds in film and TV. It generally involves creating three tracks: the movement track (body movements etc), the footsteps track (across any surface, in any shoes) and the spot FX (everything else – from scratches to explosions.)
He performed for us live, which was amazing – and showed us how each sound was made. Interestingly celery snapping and overcooked penne are used to create gory sounds.
And then he showed us just how important that sound is – sharing with us a scene from Tinker Tailor Soldier Spy (a film that he worked on) with and without foley.

Next up came Bill Wasik.
Bill is an editor at Wired magazine, and (amazingly) the inventor of the Flash mob.
In 2003 he wondered what would happen if you took a viral email (FW: FW: Fwd: FW: Fwd: FW: Funny) and made it physical, creating ‘The Mob Project.’
The Mob Project involved sending a viral email out, stating everyone was to meet at a certain place at a certain time. The first email pointed at Claires Accessories in NYC. When he arrived at the shop, there was a line of police waiting for them – and the mob was cancelled. The next attempt worked – with 200 people descending on the rugs department in Macys. It was written about by a Californian blogger, who called them a flash mob, and the name stuck.
Bill’s recently written a book about the nature of things going viral – it sounds interesting.

Tony Ageh spoke next. He was my favourite speaker of the day.
He co-created the BBC iPlayer, conceived ‘The Guide’ at the Guardian, and helped launch Wired UK.
He decided when he was younger that he wanted to make the world a better place, and work in the media. So far, I think he’s done that!
He defined the media as the movement of thoughts and ideas through time and space. I like that.
Whilst working at the magazine ‘What Mortgages?’ he wrote about the government’s Right to Buy scheme with the headline ‘Wrong to Buy.’ After a clash with the publisher, the piece didn’t go ahead.
He quit his job when the publisher said ‘You think magazines are about information. They’re not. They’re just vehicles to hang advertising off of.’
The story of the iPlayer was an interesting one. When he joined the BBC he became the Head of Search listings and Core navigation sites. One day, a BBC website about a show featuring the model Jordan went up, and the beeb was accused of going ‘softcore’. The website came down and Tony was asked to sack the person responsible. He took the guy for a drink and told him that he’d been asked to sack him, and that they were going to sit in the bar until they’d come up with an idea that was so good, the management couldn’t sack him. After many drinks in the 24 hour bar in Bush House, the stumbled across the idea of iPlayer and popped home for a few hours kip. Tony called a friend in the middle of the night, in case he forgot the idea due to his current state of inebriation.
Bleary eyed the next morning, Tony got the softcore guy to write it up and email it to him. He forwarded it on to his boss, saying ‘He can’t be sacked, he’s got the best idea the BBC has ever seen.’

After Tony, we had the writer Meg Rosoff.
She’s read a lot of mediocre books in her time, and has most recently been trying to hunt down where mediocrity comes from. She used a horse-riding analogy – throughness (when a horse is perfectly submissive and working at one with the rider) to explain her views on the relationship between the conscious and unconscious mind. The more you can work to access and control your unconscious mind, the better your work will be. Nice.
Gruff Rhys from the Super Furry Animals came up next.
He talked about a Welsh explorer called John Evans that mapped the Missouri river, and tried to hunt down a tribe of Welsh speaking American-Indians. Gruff recently recreated the journey that John took, with a puppet version of John Evans in tow – and wrote a song about the experience.
Phil Larkin spoke next about writing and his experience of using vines for storytelling. He used a quote about how constraints inspire creativity. I like that. It’s why the tighter briefs are often the best briefs. And why branding briefs are the hardest of all.
Lisa Salem talked about her project ‘Walk LA with me’. It’s a nice project, that aims to reconnect people with the city around them and the people that they inhabit it with. Her next project is called ‘Please hold with me’ – aiming to brighten up the on-hold experience that you get with customer services.
Finally, Alan Rusbridger spoke on his experiences of the Edward Snowden case.
He talked about the corporate redefinition of the Guardian that occurred due to the new media age – and this led to the hiring of Glenn Greenwald – who wasn’t a traditional journalist, but also a lawyer and activist.
Rusbridger described Greenwald as highly knowledgeable (his articles are almost scholarly) and obsessive about civil liberties and internet privacy. When Snowden made contact with Glenn, Rusbridger brought in personal friend and trusted employee Ewan MacAskill to work on the story with him – as it was such a high pressure piece.
Rusbridger came across as highly intelligent, friendly and opinionated. I’m sure he’s a fantastic person to work for.
That’s it – thanks to Matt Locke for organising such a great conference!